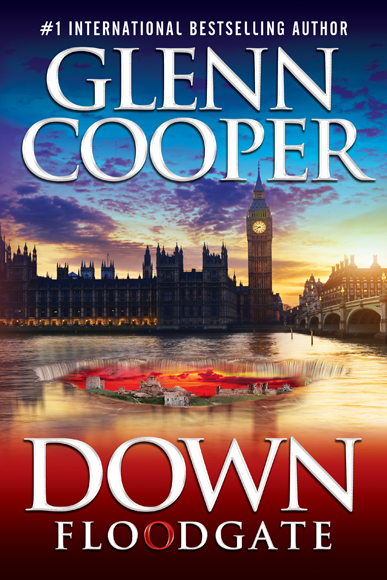 DOWN – Floodgate is the third book in Glenn Cooper’s new epic trilogy, a cross between DANTE’S INFERNO and GAME OF THRONES. DOWN is part historical thriller and part fantasy-adventure, a thought-provoking, page-turning saga that explores the consequences of evil and transports readers to a world unlike any they have ever experienced.

The crisis has gone from bad to worse. The chain of events that produced the connection between Earth and Down has galloped out of control. What had been a portal is now a floodgate. London faces an apocalyptic crisis with hordes of confused and murderous residents of Down attacking the populace. The truth can no longer be hidden. With the entire world watching and debating the philosophical and theological realities of the existence of Down, London is placed under martial law.

Emily Loughty and John Camp are convinced that one man holds the key to severing the expanding connections between the two worlds. And that man is a tragic resident of Down. To find him they will have to undertake the most dangerous and complex of all their journeys.

To buy time and protect London from marauding invaders, John assembles a band of special forces soldiers to travel to Down and fight them on their own turf. He also enlists the help of someone whose special skills might save the day, his estranged brother. In London, Ben Wellington, must deal with the spiral of violence and chaos gripping the city.

In a shocking conclusion, profoundly disturbing but genuinely inspirational, John and Emily must face one last challenge together.