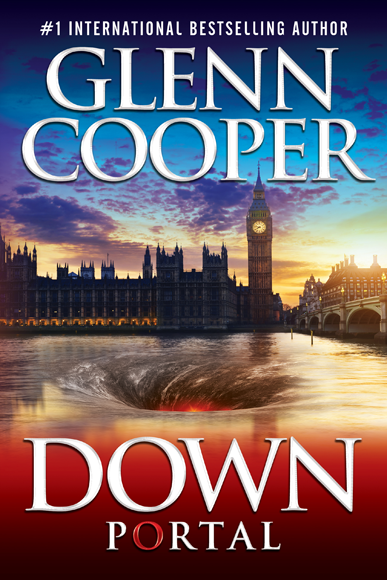 DOWN – Portal is the second book in Glenn Cooper’s new epic trilogy, a cross between DANTE’S INFERNO and GAME OF THRONES. DOWN is part historical thriller and part fantasy-adventure, a thought-provoking, page-turning saga that explores the consequences of evil and transports readers to a world unlike any they have ever experienced.

The connection between Earth and Down has widened. What had been a mere pinhole has now grown into a portal with a dozen innocents swept into the strange and terrifying world of Down.

Emily Loughty, the physicist in charge of the super-collider that opened the portal, must return to Down with her lover, John Camp, in a desperate bid to rescue the innocents and close the portal. They are joined by two volunteers, a street-savvy ex-policeman and a charismatic medieval weapons expert who hosts a popular British TV show. Together they have scant time to navigate the savage and sinister world of Down and find the scattered souls before hope is lost and all are trapped.

On Earth, Ben Wellington, a senior MI5 agent, is tasked with finding the rampaging residents of Down who have entered our world. When the most loathsome of all the men of Down, a band of rovers, begin to terrorize the English countryside, Ben must turn to the unlikeliest of allies to track them and eliminate the growing threat.